gc.adventist.org is the official website of the Seventh-day Adventist World Church headquarters.

Seventh-day Adventists are devoted to helping people understand the Bible to find freedom, healing, and hope in Jesus.

The Adventist Church has a representative form of government. This means church members have the ultimate say in who leads the church. Adventist members get together and vote for their representatives at the local, regional and global level. The members themselves, as led by God, elect servant leaders to their roles.

The most local form of governance takes place as leaders are selected to serve their local church congregations. After this, Adventists in an area are organized into conferences which are then clustered into larger unions. These unions are organized into 13 world divisions (or here add MENAU, IF and CHUM which dialogue directly with the General Conference. The General Conference has an Executive Committee comprised of union, division and other key international leaders and members, who make recommendations to a large international gathering called the General Conference Session that meets every five years in different major cities. 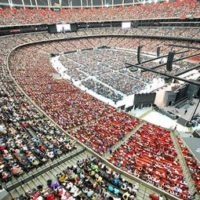 What is Session?  The General Conference Session is the forum for electing world church officers and voting changes to the church's constitution. Delegates also hear reports from each of the 13 administrative regions of the church. Voting delegates for Session represent world regions both by church population and the self-sustainability of administrative regions. The constitution…

What is the GC Executive Committee? The second highest governing body of the Seventh-day Adventist Church, after General Conference Session, which occurs every five years. In between Sessions, the Executive Committee is delegated the authority to act on behalf of the General Conference in Session. It has the power to appoint committees, such as the…

Seventh-day Adventist beliefs are meant to permeate your whole life. Growing out of scriptures that paint a compelling portrait of God, you are invited to explore, experience and know the One who desires to make us whole.